This is a story I thought I had some familiarity with as I remembered seeing the movie many years ago – man meets woman during WW2, they are separated and years later they meet again – with Alice Springs in Central Australia involved somewhere.
But the book was a surprise to me when I finally got to read it and not quite what I expected.  A tale of an unusual romance, the story is narrated by a Mr. Strachan an elderly solicitor living in post war London in 1948. 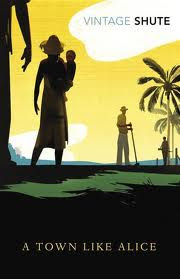 When one of his clients dies leaving behind a significant inheritance he conducts a search to trace the whereabouts of the beneficiaries. After some initial difficulty he makes contact with his client’s only surviving relative, Jean Paget, his niece, a young woman in her late twenties and he informs her of the inheritance.
A condition of his client’s will was that Mr. Strachan was to keep the money in a trust for Jean until she was 35 years old and until then she would only receive any income from the estate and so because of his ongoing involvement with Jean’s affairs, a relationship was forged between Jean and the solicitor and he came to hear about her experiences in Malaya during the war years.
Jean had lived in Malaya up until she was 11 years of age, when her family returned to England. Her older brother returned to Malaya in 1937 when Jean was sixteen and Jean followed in 1939 when the phoney war was in progress; the view being that if war broke out Jean was better off in Malaya than in England. Two years later the Japanese were advancing through Malaya and Jean, unable to evacuate, was captured by the Japanese and with a group of about 30 other woman and children was forced to walk for miles through the jungle, many of them dying in the process.
Jean became the leader of this group, caring for the baby of one of the women who had died during the march; translating, bargaining and negotiating with the villagers and Japanese soldiers as they travelled.
One day they came across Joe Harman, an Australian prisoner who helped them steal some food from the Japanese. The theft was discovered and he was punished.
‘Darkness was closing down in my London sitting-room, the early darkness of a stormy afternoon. The rain still beat upon the window. The girl sat staring into the fire, immersed in her sad memories. ‘They crucified him,’ she said quietly. ‘They took us all down to Kuantan, and they nailed his hands to a tree, and beat him to death. They kept us there, and made us look on while they did it.’
Jean returned to a quiet and lonely life in England after the war and upon learning of her inheritance she decided she would go back to Malaya to build a well for the women of the village her group lived with towards the end of the Japanese occupation.
It was here that she discovered Joe Harman had unbelievably survived his ordeal but had been hospitalised for a long time and so her quest began to find out what became of him.
In this novel Neville Shute in an Author’s Note pays tribute to ‘the most gallant lady I have ever met,’ and mentions a party of around eighty Dutch women and children who were forced by the Japanese (who were unwilling to assume responsibility for them) to trek for two and a half years around the island of Sumatra, leaving less than thirty of them alive by the end of their journey.
A Town Like Alice was first published in 1950 and reflects the culture of the time so you will encounter uncomplimentary remarks particularly about the Japanese and also Australian Aboriginals.

14 thoughts on “A Town Like Alice by Neville Shute”