Death of a Guru by Rabindranath R. Maharaj
Rabindranath (Rabi) grew up in Trinidad and was descended from a long line of Brahmin priests. His father, a great Yogi,  had renounced all attachments to the physical world within days of his marriage and from that time on had responded to no one (including Rabi who wouldn’t have been born if his father’s vows had come any sooner) and remained in a trance-like state for 8 years when he suddenly died in mysterious circumstances. 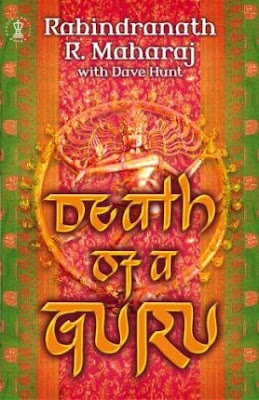 Rabi’s mother was deeply religious and taught him his duty as a Hindu. He was devoted to her but shortly after his father’s death, they were separated when she took her husband’s ashes to India to be spread on the Ganges and he was left in the care of his Aunt.  His mother was not to return until 11 years later.
At the age of 10, Rabi’s reputation as an uncompromising religious Hindu was growing and he was accepted as a student at the temple where he spent his days in transcendental meditation, yoga and other religious devotions, but his belief in the idea that he was ‘a chosen vessel, destined for early success in the search for union with Brahman’ clashed with the reality of daily life and caused much friction between his Aunt & himself.
‘It seemed difficult to face everyday life after hours in trance. The conflict and contrast between these two worlds was unresolvable. The higher states of consciousness I experienced in meditation were supposedly approaching reality as it really was. Yet the everyday world of joys and sorrows, pain and pleasure, birth and death, fears and frustrations……this was the world I had to deal with, and I dare not dismiss it as illusion unless I was prepared to call insanity true enlightenment. My religion made beautiful theory, but I was having serious difficulty applying it in everyday life.’
The book details his increasing deep inner struggles and conflict, his fear of the gods he worshipped, the caste system  & the unchangeable law of karma and at the age of 15 years, ‘the death of a guru’ with the  revelation that the true God and Shepherd loved him and was speaking to him.
The book continues with the transformation of many members of his family, his difficult reunion with his mother, medical studies in London, work with young people who were being swept into Eastern mysticism through drug use, and eventually his call to expose the Hinduization of western Society.
Although this book was written some years ago, I think it’s still important for today. We’re just on the other side where transcendental meditation, Yoga, ‘doing one’s own thing’ (dharma) and other Eastern concepts are now a part of our culture.
The descriptions of Hindu life and culture alone are very informative but I haven’t read another book that explained Eastern mysticism so well and for students heading into a world that is ‘doing its own thing’ it could be very valuable.
According to the author Yoga literally means ‘yoking’ and refers to union with Brahman. The positions and breath control are intended as aids to to Eastern meditation and he states that no part of Yoga can be separated from the philosophy behind it.
The book was first published  in the late 1970’s and is still in print but has been updated.
I like to schedule this at some stage in in upper high school for its philosophical and biographical aspects.

One thought on “Death of a Guru”