These are some books I read aloud that were particularly enjoyed by the boys in the family when they were between about 6 and 12 years of age. For reading on their own I\’d say about age 10 years but when I  read them aloud we got out the atlas and had a look at google images together and afterwards I found the boys going back to read them on their own.
I don\’t plan the rabbit trails before I read a book aloud but I do make sure we get out a map of some sort – we have an old Reader\’s Digest International Atlas which has the most obscure places all through it – apart from that I let them make their own connections and if the book is a good one, there are always trails to follow. 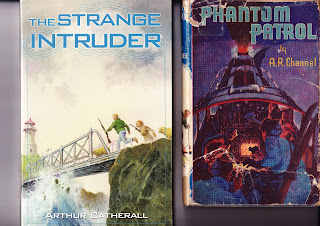 Phantom Patrol by A.R. Channel
One of the our all time favourites, Phantom Patrol, written in 1940, tells about the series of adventures of five boy scouts in Finland at the start of the Russian invasion. Two Finns, two Lapps and their young English  leader perform a daring rescue of the leader\’s father from the burning city of Petsamo in the far north of Finland. Action from start to finish and vivid descriptions of a frozen wasteland drew us into the story and made this book a hard one to put down. We had many interesting threads to follow throughout this book – the Lapp (Sami) people, the geography of Finland, and Stalin were some. The youngest boys at the time were also curious about reindeer which are such an important part of the Lapplander\’s lives.
The author dedicated this book to the Boy Scouts of Finland who helped to defend their country in the war of Petsamo, 1939-1940.
As I was writing this post my youngest son looked over my shoulder and said, \”I loved that book!\”
\”We must become the Phantom Patrol,\” Stuart interrupted. \”We are now behind the Russian lines, and only a phantom can hope to live. Only a phantom can hope to get into Petsamo and live. While these parachute gunners are driving the Finns back, Russian troops will be marching over the border. Forget that we were ever the Reindeer Patrol….from now on our name in fact and fancy must be Phantom Patrol.\”
The Strange Intruder by Arthur Catherall

Arthur Catherall has written many books and has used at least seven pseudonyms, one of them being A.R. Channel who wrote the above book. The Strange Intruder was published  in 1964 and is about a cod schooner which was headed for Thorshavn, the capital of the Faroe Islands, after a six months\’ trip up the Davis Strait. On its journey homeward the schooner\’s propeller shaft hit a clump of wreckage, resulting in major damage to the engine room and serious injury to the ship\’s engineer.
An SOS sent out by the master of the schooner alerted the residents of Mykines who remained on the island that day – a handful of women, old men, young children and Sven, a 16 year old boy.
Sven had been bitterly disappointed when the other men and boys of the island had rushed off in the sudden excitement of a whale hunt and he had been left behind to help his disabled uncle haul in the fish catch. Now as they were rowing back to the island they realised something was wrong as Napoleon, Sven\’s Grandfather, appeared on the cliff top waving his arms. Not understanding that he was trying to get them to go out after the whaling party, Sven and his uncle returned to the island where they heard the news of the stricken boat.
Sven\’s father was first mate on the schooner but in the face of a force ten gale about to hit the area there was no chance of attempting a boat rescue. Napoleon asked Sven to run the four miles to the east end of the island to try to smoke signal the boats on the whale hunt but with the change in the weather the signals fail.
This book moves quickly and has a surprise twist with a \’reign of terror\’ – which I won\’t spoil by revealing anything more……..

\”The Faroese Seeker was riding with her bows into the wind, kept thus by a
massive sea anchor paid out from her foredeck. She drifted along immersed in a
continuous patch of foam. Now that she had come abreast of Mykines the rocky
coast line was throwing back the surge of the Atlantic rollers, and as a result the
the seas were more broken…….
Like a tired swimmer she had struggled upward, but for seconds her afterdeck
had been hidden under a roaring flood. Then, in a flurry of foam, something went
over the starboard stern rail. From the cliff top it looked as if someone had upset
a box of giant matches…….and in the middle of them was a swimmer!\”

Both of these books stirred up an interest in the people, wildlife and areas we read about. The author obviously knew what he was talking about and his descriptions made us curious to have a look at maps of Finland, Russia and the island of Mykines and pictures of the Faroe Islands. Yes, there was action and adventure which appealed particularly to the boys, but he wrote with a first hand knowledge and an identification with the people in his stories. It was interesting after we had read the book, to look at photos of Mykines and the tiny island of Mykinesholmur where Sven battled across the trembling bridge to take news to the lighthouse keeper. It was so like what we imagined from the author\’s description.

Images of Mykines in the Faroe Islands: here.

For information about this author: see here.